The Canadian Museum for Human Rights (CMHR) opened recently in Winnipeg, my hometown. 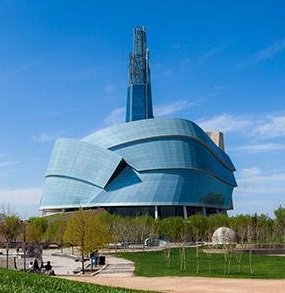 It is powerful in both form and content. The focus is on human rights and the creators wisely didn’t try to replicate the Holocaust Museum in Washington.  The exhibits are engaging and diverse.  The sections on First Nations / Aboriginal peoples are particularly moving.

There is some focus on the treatment of the mentally ill, the experience of the asylums and the unpaid labour done in those institutions.  There are also details on Action T4, the program put in place by the Nazis for identifying and murdering those seen as “useless eaters“, first by starvation and lethal injection and later by poison gas. Before the Jews were put into gas chambers the technology was perfected on those with mental illnesses and disabilities.

Psychiatry during the Nazi era: ethical lessons for the modern professional, available in its entirety online, is well worth reading . In it Rael Strous writes:

“During the Nazi era, for the first time in history, psychiatrists sought to systematically exterminate their patients. It has been acknowledged that the medical profession was profoundly involved in crimes against humanity during this period, with various publications describing this malevolent period of medical history. It is less known, however, that psychiatrists were among the worst transgressors.”

“Much of this process took place before the plan to annihilate the Jews, Gypsies and homosexuals of Europe. Hitler never gave the order to kill patients with mental illness. He only permitted it in a letter written in October 1939 and backdated to September 1, 1939. Psychiatrists were therefore never ordered to facilitate the process or carry out the murder of mentally ill…they were empowered to do so.”

ACT clinicians are often working with individuals who have devastating illnesses that are life-changing for them and their families.  It’s important to remember that one’s value as a human being is not contingent on whether one has, or doesn’t have, a major mental illness.

Wishing you and yours – including your clients – a Happy and Healthy New Year.

The Disorder Of Things

For the Relentless Criticism of All Existing Conditions Since 2010

The Art and Craft of Blogging

The latest news on WordPress.com and the WordPress community.